At its meeting on July 18, the U.P. City Council voted unanimously to support placing a public safety levy proposal on the November ballot to support increased funding for the U.P. Police Department. The proposal, if passed, would enable the UPPD to hire additional staff to address citizens’ concerns regarding public safety in University Place, especially amid the city’s growing population.

“When I campaigned for this position, I went door-to-door. I probably spoke to 1,200 to 1,500 of my fellow citizens,” said Council Member Ed Wood, who like his fellow Council Members fully supports putting the measure to the voters. “The number one issue that people talked about was public safety, whether it be traffic and traffic enforcement or property crime.”

Council Member Stan Flemming said the levy proposal reflects the desire of citizens and the City Council to make public safety a top priority. “This is really about a request from the community and as such, the community has the right to decide,” he said.

The Council’s vote follows several community listening sessions, during which time more than 100 citizens attended in person and another 700 visited the public safety levy page on the City’s website. Another 900 online viewers visited the Police Department’s webpage.

“Our goal was to try to give the public—citizens and business owners alike—the opportunity to learn, ask questions and view the data for themselves,” said U.P. Police Chief Greg Premo. “We appreciate the level of engagement the public has shown and their willingness to engage in an honest, civil dialogue about an issue that affects us all.”

The proposal which will appear on the ballot is one presented by Chief Premo that proposes to include funding for two additional positions in the investigations unit, add two dedicated traffic enforcement officers, and add two additional patrol officers to each shift. Two new community outreach positions will assist with community education and crime prevention efforts.

View the specific public safety levy proposal here and watch all three forums to learn about the proposal.

Why is the City discussing a ballot measure to increase funding for Public Safety?

While University Place has a relatively low and stable violent crime rate, the City has experienced growth in the property crime rate, resulting in higher calls for service at the Police Department. After completing a comprehensive study on police services, the City Council has begun the process of educating the community about the community’s public safety needs and seeking public input on the idea of a property tax levy to support additional police staffing.

How much do I currently pay for police services in University Place?

The primary revenue source for the City’s public safety expenditures is property tax. In fact, all the property tax collected by the City is dedicated to public safety funding. For an average- home in U.P. (valued at $524,870, as determined by the Pierce County Assessor-Treasurer), a homeowner pays the City approximately $408 in property tax.

I pay thousands of dollars every year in property tax. Why does so little go to the City for public safety expenses?

The City only receives approximately $0.06 for every $1 a homeowner pays in property tax. 94% of property taxes are distributed to other jurisdictions, such as the School District, the Fire District, the County, and the State.

Most of that amount is determined by voter approved levies and bonds for our community’s school and fire districts. 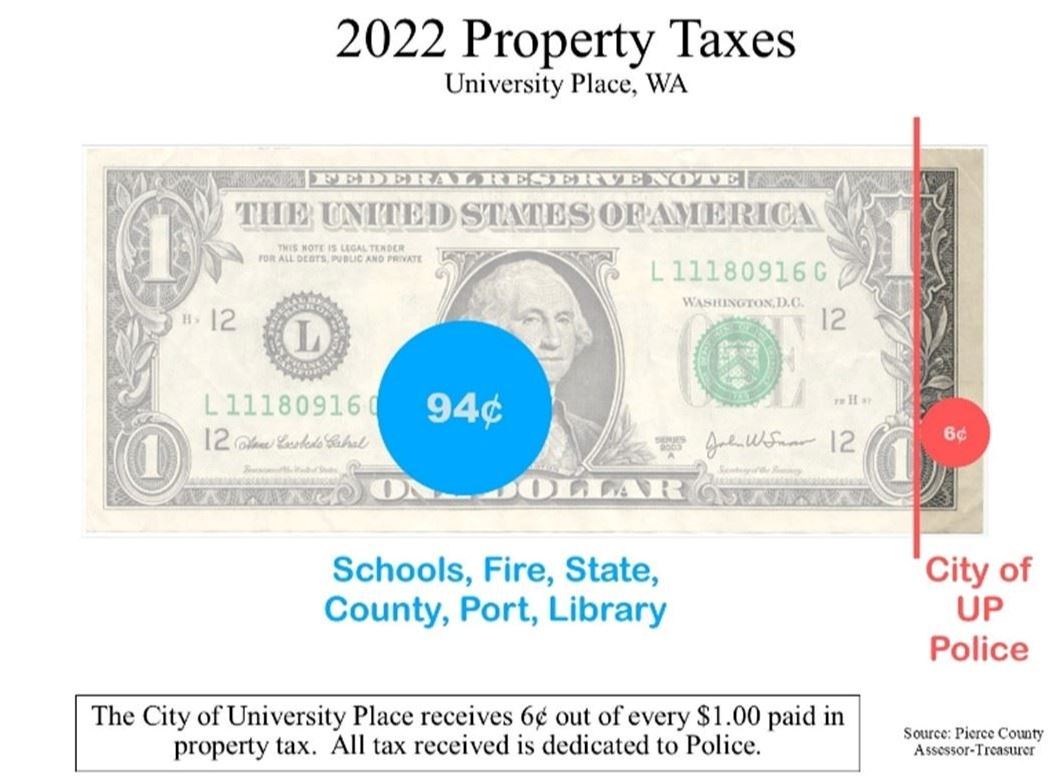 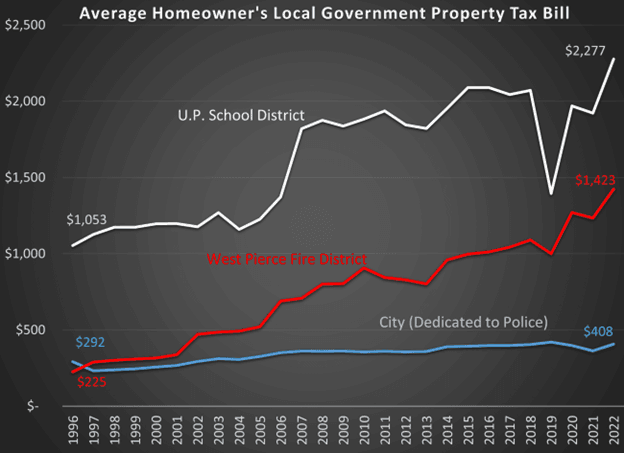 Why isn’t the amount I pay in property taxes to the City enough?

State law severely limits how much additional revenue the City can collect in property taxes each year without voter approval. The annual increase is limited to 1% more than the City received in the prior year, plus tax on the value of new construction. For 2022, the City will receive $71,209 more in property tax than it received in 2021. In contrast, the City’s police services contract increased by $193,660, due to ordinary inflationary expenses. This discrepancy is not sustainable.

Why can’t the City just fund Public Safety and then cover the other City functions with whatever is left?

The City’s budget places a priority on meeting legal obligations and the provision of essential services. The City spends almost 40% of its operating budget on public safety expenses. The budget also reflects, however, the City’s statutory obligation to process permits, adopt and enforce zoning regulations, maintain public records, account for its finances, and repay its debts. And, finally, the budget prioritizes the minimal needs to maintain public facilities, including basic maintenance for streets and parks. These activities and services represent most of the City’s expenses. Given these obligations, it simply is not possible to fund additional public safety staffing and services without new revenue.

Yes, apartment complexes are taxed at the same tax rate as single family, commercial and vacant properties. The amount of tax is based on the value of the property.

Why can’t apartment complexes pay more for police services because they use more of the service?

It is a common but mistaken belief that apartment complexes use more police services. For example, we reviewed calls for service data for five complexes here in U.P., from 2016 to 2020. We found that these apartments generated 0.9 calls per unit. We then reviewed the data for a single-family residential neighborhood with a similar number of residential units. We found the single-family neighborhood generated 0.9 calls per residence.

How does our community’s police staffing compare to similarly sized cities?

Our community has the lowest officer to citizen ratio in the State of Washington (0.45 officers per 1,000 residents, compared to an average of 1.19 for similarly sized cities. While this formula is not the only measure used to establish police staffing levels it does give a glimpse into our staffing challenge.

Our officers also handle a higher-than-average number of calls for service than neighboring jurisdictions. This reduces the opportunity for pro-active police work, to include follow-up investigations, traffic enforcement, neighborhood patrols, and community engagement. 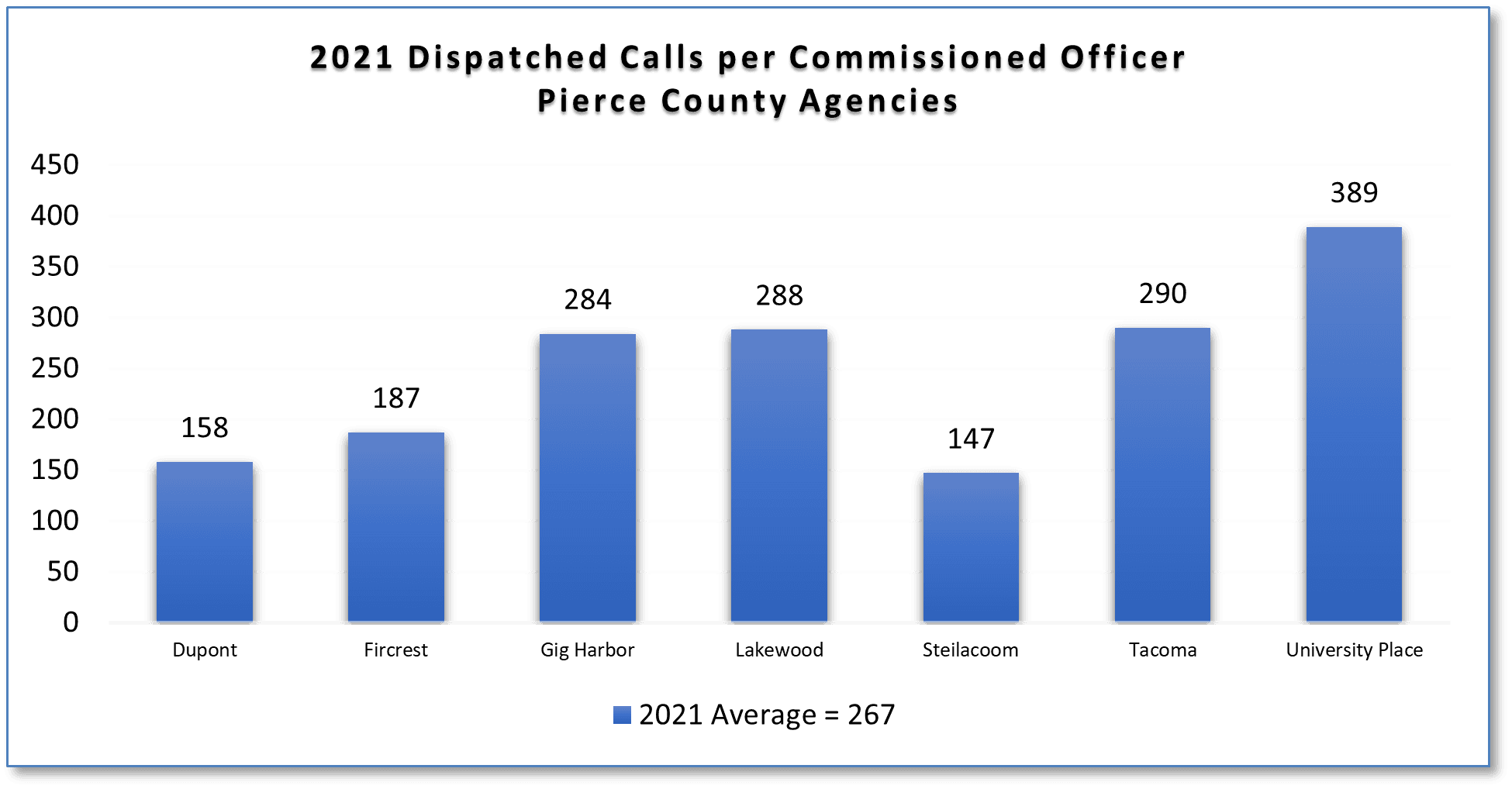 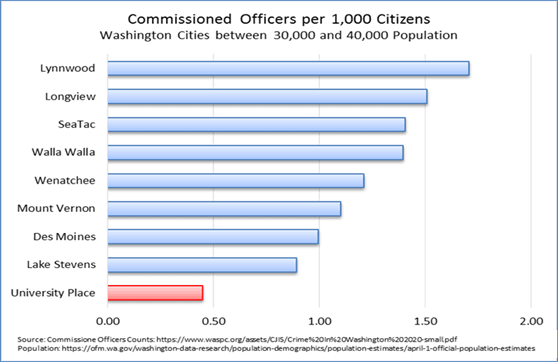 Has the U.P. business community seen an increase in crime?

Yes, specifically around shoplifting/theft. Our six-year average for shoplifting incidents is 125 per year. This year, we are on pace for nearly 200 – a 64% increase. We also have seen increased calls for suspicious behavior and loitering that are associated with these types of incidents.

How many additional officers would be added under the plan that the City Council is considering?

Our Police Department has 16 commissioned officers. The City Council is considering a several staffing models that would increase staffing by 6 to 14 officers. These officers would include additions to investigations (specifically to focus on property crimes), patrol officers to enhance response times and the visual presence in our community, and officers dedicated to traffic enforcement.

Any other staffing additions proposed?

Yes, during the staffing model research, we identified the need for one or two limited commission positions located within the police department to help address calls for service that require an individual trained in public safety but do not require a full commissioned officer. The position would have outreach functions with persons dealing with various types of crises. They would have enhanced knowledge of community resources to be an effective primary responder for welfare checks and calls about homeless complaints or panhandling.  Additionally, the position will be trained to provide crime prevention education to businesses, apartment complex managers, and homeowners to help tackle our property crime challenges. The position also would be able to handle routine reports, freeing up commissioned officers for higher-level tasks.

Limited commission officers provide a visible presence and perform important duties, but they are substantially less expensive than commissioned staff.

How much would this additional staffing cost?

Depending on the staffing model, the estimated additional cost to the average homeowner would be approximately $14 to $30 a month.

How has staffing challenges affected public safety services in U.P.?

When the established a Police Department in 1996, the City had 25 officers.  That staffing model allowed to City’s Police Department to adopt a motto called “no call too small.” This is one of the components of community-oriented policing – having sufficient staffing to take time for officers to work with residents on issues in their neighborhood, not just “take the report and go.”

Today, with a staffing of 16 officers and a growing demand on public safety services, that motto has been severely impacted. UPPD officers still respond to all types of calls for service, but our response time may be delayed compared to year’s past. Also, we ask citizens to complete online reports for several types of crimes to avoid dispatching officers to help maximize their time. This is not the most effective way to address crime problems. While online reporting may be convenient for some citizens, it does not provide the most efficient way to document and review a criminal incident. Most citizens are not report writers and either don’t know what to include or how to write it accurately. Also, they may miss evidence or important details that can be helpful in an investigation. Online reports are still reviewed by a UPPD supervisor, but the process still doesn’t allow for the most effective response to a reported criminal incident.

How would these additions improve public safety?

There are three areas of improvement that the various staffing models address. The first involves police availability and visibility. With only two patrol officers on at a time, the amount of time where both officers are tied up is becoming more frequent. This means more and more calls are pending longer. An increased amount of police visibility also will enhance community safety.

The second involves our capacity to address growing crime problems in our community. Adding to our investigations staff will help address the property crime challenges and hold more criminals accountable for these “lower-level crimes,” so they learn not to commit them in U.P.

Lastly, as noted above, addition one or two non-commissioned into the Police Department would help focus our patrol officers’ time on more pressing issues, while providing critical functions at a much lower cost than a commissioned officer.

What Does Public Safety Mean to You?

Hear what some of your neighbors have to say in the video below.